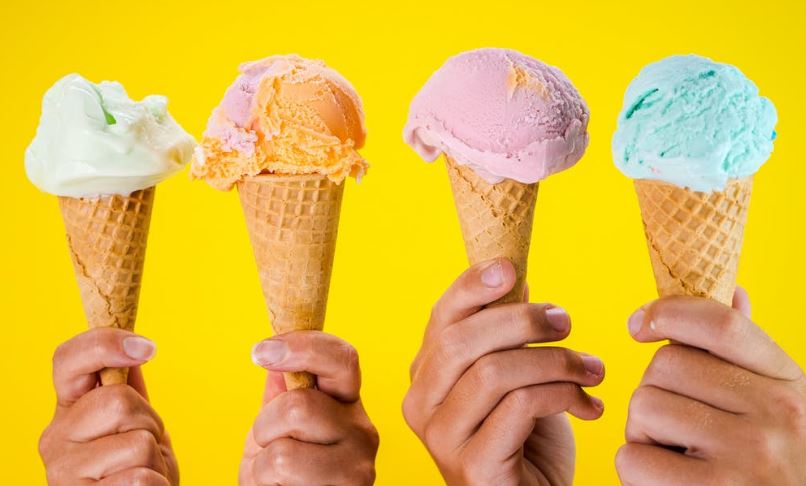 Frozen Custard is a cold dessert similar to ice cream, but made with eggs in addition to cream and sugar. It is usually kept at a warmer temperature compared to ice cream, and typically has a denser consistency.

The Story of the Frozen Custard

The invention of frozen custard can be traced back to 1919 in Coney Island, New York. Ice cream vendors Archie and Elton Kohr realized that when they added egg yolks to ice cream, it had a smoother texture and helped the ice cream stay cold longer — perfect for hot summer afternoons on the boardwalk.

In their first weekend on the boardwalk, they sold 18,460 cones.

A frozen custard stand at the 1933 World’s Fair in Chicago introduced the dessert to a wider audience. Following the fair, the dessert’s popularity spread throughout the Midwest; Milwaukee, Wisconsin, in particular, became known as the “unofficial frozen custard capital of the world”.

Major frozen custard chains in the United States include Culver’s, headquartered in Prairie du Sac, Wisconsin, with outlets in 20 states; Freddy’s Frozen Custard & Steakburgers, based in Wichita, Kansas, with more than 300 locations nationwide; and Andy’s Frozen Custard, based in Springfield, Missouri, with over 70 locations in 13 states. Other chains serving frozen custard include Ted Drewes, Rita’s, The Meadows, and Abbott’s.

In the United States, the Food and Drug Administration (FDA) requires any product marketed as frozen custard to contain at least 10 percent milkfat and 1.4 percent egg yolk solids. The FDA also allows the names “french ice cream” or “french custard ice cream” to be used. If it has a smaller percentage of egg yolk solids, it is considered ice cream.

True frozen custard is a very dense dessert. Soft serve ice creams may have an overrun as large as 100%, meaning half of the final product is composed of air. Frozen custard, when made in a continuous freezer will have an overrun of 15–30% depending on the machine manufacturer (an overrun percentage similar to gelato). Air is not pumped into the mix, nor is it added as an “ingredient” but gets into the frozen state by the agitation of liquid similar to whisking a meringue.

The high percentage of butterfat and egg yolk gives frozen custard a thick, creamy texture and a smoother consistency than ice cream. Frozen custard can be served at −8 °C (18 °F), warmer than the −12 °C (10 °F) at which ice cream is served, in order to make a soft serve product.

Another difference between commercially produced frozen custard and commercial ice cream is the way the custard is frozen. The mix enters a refrigerated tube and, as it freezes, blades scrape the product cream off the barrel walls. The now frozen custard is discharged directly into containers from which it can be served. The speed with which the product leaves the barrel minimizes the amount of air in the product but more importantly ensures that the ice crystals formed are very small.

The differences in nutritional information for custard and ice cream are that custard contains fewer calories than ice cream, more protein and calcium than ice cream and less fat and carbs.

Custard is a good source of calcium and B vitamins, especially vitamin B12. These are helpful in strengthening bones, good digestion and cell health. Homemade custard does not have any artificial additives, which makes it tastier and healthier to consume.

Custard is good for putting on weight because of its egg content.

How to Make Frozen Custard

Temper the eggs (slowly dilute them with hot liquid) to prevent them from cooking too quickly. This will ensure a velvety smooth finished product.

Frozen custard takes a while to prepare, so plan your day accordingly. You’ll need to refrigerate the egg base for at least a few hours before you transfer it to the ice cream machine – the longer the better.

This goes for ice cream and frozen custard: If your frozen dairy desserts tend to get a little too frozen, try adding a one or two tablespoons of liquor or liqueur to the mix before storing them in the freezer. This will help keep ice crystals at bay.

Does frozen custard cause weight gain?

Yes. Too many calories (specifically more calories than your body burns) will cause you to gain weight. It is important to burn the calories gained by having a bowl of frozen custard. Especially, if you are on a weight loss journey, it is not advisable to eat such a high calorie and sugar dessert. Instead, it is advised to go for other healthier and low calorie foods.

Frozen Custard by the numbers

In a report posted by Data Bridge Market Research the frozen custard market is expected to gain market growth in the forecast period of 2021 to 2028.

Data Bridge Market Research analyses the market to reach at an estimated value of USD 1.56 billion and grow at a CAGR of 5.80% in the above-mentioned forecast period. Rise in the disposable income drives the frozen custard market.

Moreover, rising study and progress activities and increasing innovation in the new products offered in the market will further create new opportunities for the frozen custard market in the forecast period of 2021- 2028.